I'm inspired by this picture, which I found on Pinterest. 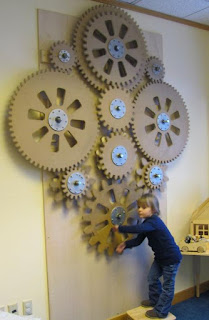 I want to have a wall of gears too!

Mine will be different though.   I don't want them to be symmetrical, and I want each gear to be very different from each other.

I want the gears to be pretty big.   The first one I designed is about 3 feet across.  Here is a picture of it: 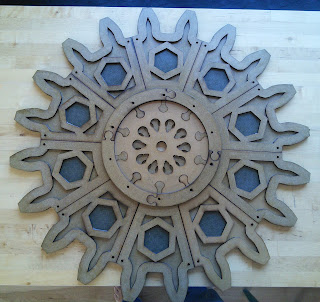 Since the laser-cutter I use only has a 24x12 bed size, I needed to split the gear up into 10 different sections, plus a section in the middle into which all 10 outer sections fit.   I made 2 identical layers (each 1/4 in thick), and then staggered them, so the bottom layer supports the top layer when glued.

I also added some dark paper in each hexagon, to add some visual interest.

I'm happy with how this one turned out, so I'm off to design the next gear.

I decided to make a round box.  It has 64 flat sides, which when put in a circle, gives it a fairly round look.  I also want to put an "Mechanical Iris" on the top, so you can open it in an interesting manner.

Here is the design from SketchUp. 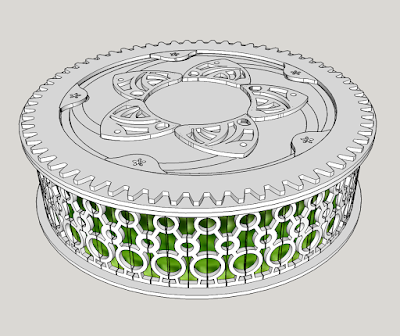 The design has some green in it, because my initial thought was to put green paper behind those elements in the box.   I later decided against it.

Here are some pictures of the final box, cut in MDF.  Now that I know this prototype works, I can re-cut it in some nicer wood, like poplar, or Baltic birch. 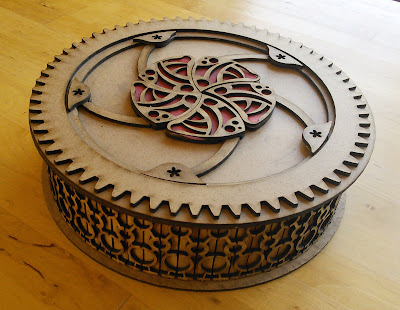 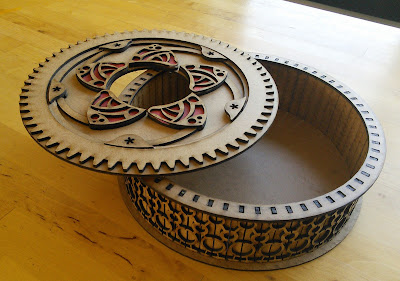 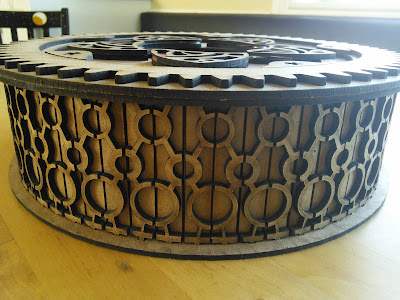 I did end up using paper to decorate part of it, but it was in the iris parts, in red, and not on the main box.

The big challenge with this box was assembling it.   I actually ended up cutting a piece just to hold the 64 sides in place while I glued them.